Back from America and a new album out!

The tour in America with Slate Dump was amazing and I have a lot of photos, videos and music to share on this blog.  For now though, the first thing I'll share is a link to my latest release.

When me and Slate Dump were on tour we recorded live on KAOS Radio Austin for the Smooth and Demented Show and we decided to release it on Cheap Wine Records.

It's a FREE download or if you would like to help support independent music, you can buy a hard copy for £4.50.

Scottish bluesman Sleepy Eyes Nelson walked into KAOS radio with his punk/folk touring companion Slate Dump. These two men were on a mission.  Bring honest, DIY style music to the American south while paying homage at some of the great and historic blues  locations along the way ...like the memorials of Lightnin' Hopkins , Hasil Adkins ,Ledbetter and ol' John Henry .

( Maybe fire a few cheeseburgers into their guts while they were at it!)

This recording of Slate Dump and Sleepy Eyes Nelson live on KAOS radio perfectly captures the independent, rebellious quality found in darker corners of today's underground country-blues world.  The authentic and well crafted blues of Sleepy Eyes Nelson along with the uncompromising acoustic punk of Slate Dump  was form fit for the anti-establishment sprit we hold dear at KAOS radio.
I hope you enjoy listening to these two talented musicians as much as I enjoyed recording them. 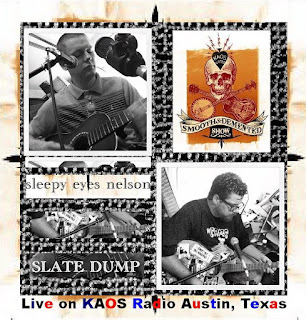 Posted by Sleepy Eyes Nelson at 02:15 No comments:

Sleepy Eyes Nelson
Sleepy Eyes Nelson is a country blues singer, songwriter, and guitarist from Scotland. First discovered by the American record label Devil’s Ruin Records. He has a distinctive finger style of playing, playing in effect the bass, rhythm, lead, percussion and vocals all at the same time. He has developed a following in America, mainly the south, where he has toured with the West Virginia songster, Slate Dump. "It does not take any time at all, once you start listening to Sleepy Eyes Nelson's music, to realize that when it comes to Country Blues, he is certainly the real deal. He is probably one of the purest and unpretentious Blues players out there today. He lives his life with a rare simplicity and creates and plays his style of Country Blues in much the same manner - THE BLUES UNDERGROUND NETWORK - For Bookings please email: sleepyeyesnelson@hotmail.co.uk